This is the thread.

Not only it warms my heart to know people still illustrate Xenosaga... but it's amazing when the fanarts have so much life to them. Look at the artist's other stuff. It's worth it. It's mainly URTV focused.
kare_reiko

For many years I love this person drawings:
http://www.geocities.jp/flying_note/flyingnotetop.htm

Amazing Xeno artist and I would love to draw like her.
There was another artist that were posted here a lot too, but he dissapear, someone find his other blog but no longer Xeno-themed, I would love to know if he has new blog about Xeno or he move on from it.
_________________
In my long-forgotten, cloistered sleep
Someone kissed me, whispering words of love
Is it just the longing of my heart?
Such a moment of such peace...
Tehrin

Amazing Xeno artist and I would love to draw like her.
There was another artist that were posted here a lot too, but he dissapear, someone find his other blog but no longer Xeno-themed, I would love to know if he has new blog about Xeno or he move on from it.

Kazuo? He's still around but he took his art site down (I would not be suprised if it was due to art theft).  He's here now: http://dakkun39.tumblr.com/ Looks like he recently posted up some old Xeno artwork. :) I just don't think he draws anything new. Though he's been liking some of the xeno stuff I draw on occasion. I do miss his old art blog though it was fun going through and looking at all the new doodles! ;A;

She got into a good art school and I think works for Pixar or something like that now? So no fanart. ;A;

I miss talking to her! We did a few collabs back in the day!
stitchedmoon

^ Oh, yeah! I remember seeing RDSullivan's art on XL and dA around the time I joined the fandom, back in 2006. I miss seeing new stuff from her, but it's good to hear she's pursuing a career in the arts. :3

(And speaking of elusive Japanese fanartists, anyone remember that one person who had a lot of black-and-white sketches that were mostly Pied Piper-centric? I used to have their site bookmarked, but I forget where it was now.)

Wow, so many great artists, its nice to see so many people drawing Xenosaga! Good topic idea, I love seeing all this amazing art <3

As for me, by far my favorite artist would be Salyut!!:
http://www.salyut.net/

She's basically everything I could ever ask for in xenosaga art. Her concepts, art style, everything is great. She draws a lot of Pied Piper-era Yuriev and Zora, also one of the few people I've ever seen draw younger Yuriev from the time of the transfer experiments, which is pretty much my favorite thing to think about. (She even posted a 13 page part of a doujin on her tumblr that actually talked about them!!)  Lots of the URTVs as well, and I know she has a lot of doujinshi which I'm desperately trying to hunt down ;A;

I've talked to her a bit with my limited Japanese, she seems like a cool person too, wow I could just go on and on about her!
katimus_prime

Not sure if she counts, but my favorite Xeno artist will always be Soraya Saga.  Even if there's very little Xeno between projects, there's always some that crops up after a while.  I know she's with the Monolith team, but there seems to be a very, very, very limited section of hers displayed within the official production works.  The stuff that's the most visible is the stuff she just posts up on her twitter, pixiv and DA accounts, which is on the same channels most fanart is displayed.  Her aesthetic is unmatched by anyone else I can think of.  I really love it when she posts anything at all, too.  Her art is just so good, asdfdasfs.

Another favorite fanartist of mine is LilyKane, who currently goes by LMJWorks on deviantart.  I don't see her anywhere else, but I really love all of her work.

Dakkun also watches my art blog on Tumblr.  *A*  I have to stop and re-contain myself every time he likes something that I post (which seems to happen a lot...!!!).  He does seem to have acquired a taste for Dragon Age, Mass Effect and Lord of the Rings lately, but as with Soraya, I enjoy all of his art.

Also, a second motion on Stitched's shoutout to friends.  :3  Yall rock and are super-awesome!!

There were one or two Japanese artists I'd found who drew a high volume of Ormus-centric stuff back in the day, but I never got their names and I haven't looked for them in a while.  There was an artist who liked Shion and Cherenkov together and her(I think she was a girl?  If not, then his) artwork seemed heavily influenced by the DS game.  I've lost the URL to the site, though.  -_-;
_________________

^ Heck yeah Soraya Saga and LMJ! <3  (Speaking of which, this will forever be amazing.  Slightly NSFW, though.)

askjfhskf I'm trying to remember the name of that Japanese directory of fanart sites where I found a lot of that stuff back in the day.  I don't even know if it's still up, but I remember the domain name was something Xeno-related.

Update: ERMAHGERD I FOUND ONE OF THE SITES I LIKED

My favourite fanarts are the Richard and Hermann ones Stitch has drawn for me over the years. <3 I also love all you fanartists here on XU!
_________________
Bona fama in tenebris proprium splendorem tenet.
Resident Richard and Hermann fan! If anyone stumbles across any info or fanart of them, PM me and I will love you forever.
Avatar artwork is by stitchedmoon! <3
RadicalDreamer

Not a fanart but a little something Tanaka (the chara-designer) did very recently :
http://kunihiko-tanaka.tumblr.com/post/94226223957/kos-mos-ver-1
It's pretty awesome. You get to see the progress and there is a few sketches of the main party in one picture.
katimus_prime

"There is no growth without birth.  Without a foothold in the past, we cannot walk toward the future.  Get thee gone, darkness!"
Valkyrie

Some good Xenosaga and other JRPG Fan-arts here :

"There is no growth without birth.  Without a foothold in the past, we cannot walk toward the future.  Get thee gone, darkness!"
BlueMetal

The profound lack of Ziggy makes me sad. :[
katimus_prime

Yeah, sourcing stuff these days is a lot easier than it used to be, but it's the principle of the thing if that makes sense? I am a little wrapped up in artist credits on account of what I was taught in school and hanging out with artists on a regular basis, tho. On one hand, they're not claiming they drew it, but on the other hand, not a whole lot of these have watermarks on them, so it's polite if ythe source is linked. I guess not everyone thinks like that, though. ...which reminds me, I should probably start watermarking my own stuff...
_________________

^ Yeah, it is always good form to give credit to the artist/sauce.  (I think pixiv actually has a policy about that?)

This too.  Seems to be par for the course, though.  (And I recognize two of the three artists in his thread???)

I WILL GET BACK TO DRAWING STAT... after I stop spagetti-ing all over my tablet.

There needs to me more Ziggy fanart in this world. ;A;
katimus_prime

There needs to me more Ziggy fanart in this world. ;A;

"There is no growth without birth.  Without a foothold in the past, we cannot walk toward the future.  Get thee gone, darkness!"
RadicalDreamer 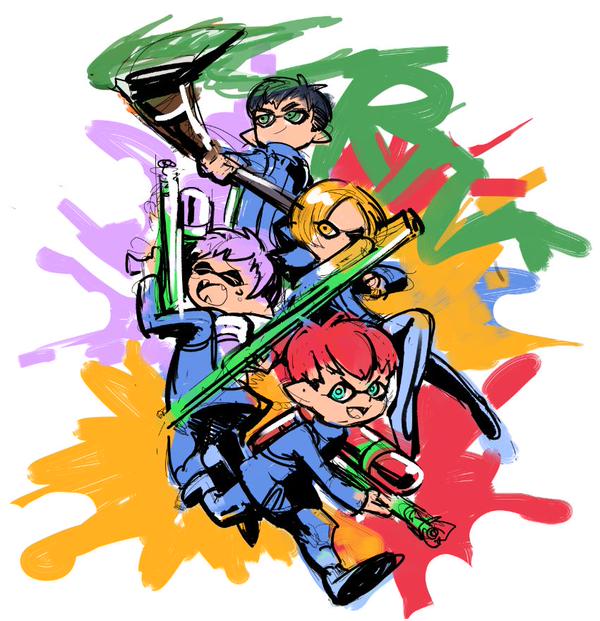 By this artist (who is really great... careful, there are a few Xenoblade X art... nothing too spoilery for the moment though) : https://twitter.com/otepika/media
Sponsored content