Stared by Xernova over on Temp Sibb.

Xernie8D wrote:(Did you see the SPOILER warning? Yes? Okay then!)
There are some obvious character parallels between Xenogears and Xenosaga. Some are very easy to spot, some are a bit harder because some Xenosaga characters appear to be a composite of multiple Xenogears characters.

I'll start with a very easy one... uh, after I google something (lol).
Vanderkaum (XG) => Vanderkam (XS)
Yeah, I think I got that right (I can never remember who is from which game).
They're pretty much the same kind of character; aggressive military muscles-for-brains guy who pretty much causes his own downfall in battle for relying solely on heavy firepower. Vanderkaum is maybe a bit more memorable in his appearance, if only because he "wants the power!" (and gets it).

Citan (XG) => Jin (XS)
Another easy one. Citan is perhaps a bit more calculating about which move he'll be making next, and whether Jin can defend himself without a blade is questionable, but other than that the similarities are obvious. Jin running a bookstore seemed like a reference to Citan being a bookworm himself, not sure if that was intentional. But XSIII Jin's look is an obvious reference to Citan's character design.
Bottomline; despite the similarities, I'm a much bigger fan of Citan than Jin (though I like them both).

That's all from me for now!

Omega wrote:Again,I've never played Xenogears but after seeing some characters, Omega ID (optional boss in xenosaga 3) is obviously a reference to ID from xenogears,including some of his attacks that change the background a bit.

Another obvious throwback to Xenogears;

Yuriev somewhat puzzles me. He seems like a composite character to me, but I'm not sure of which XG characters. I'd say;

Yuriev (XS) => Miang & [?] (XG)
Miang because of the obvious bodysurfing ability both use as well as both having an iconic moment of "I awaken in your friend's body, watch the hair changing into my own hair color!"

Now, I'm not sure which the other XG character would be. Yuriev wants to "fight God" (*) and in XG Fei is the "Godslayer" (well, thanks to his Gear), but other than that it doesn't really match. Maybe Grahf? Or Id? I dunno! Thoughts welcome.
(*It's been too long since I last played Xenosaga, I don't remember Yuriev's exact motive, which doesn't help)

I'll leave it at this for now.

katimus wrote:I really like your ideas, Xerno!  I'll respond to them more in depth when I get the chance!

In the meantime, I'm going to start with my obvious ones.
Kahr Ramsus => Andrew Cherenkov
Honestly, the fact that the two even look similar is what got me interested in Cherenkov when Xenosaga came out.  Their stories do differ, but the themes for both these characters are just as strong (perhaps even more strongly inferred) as Jin => Citan, in my opinion.  If Ramsus is a true recurrence of Cherenkov (however, I don't think he can be?), it's a little bit of an improvement, since Ramsus does end up swimming in girls.

Isaac Stein/Bishop Stone => Commander Margulis
Religious nut with purple hair is so easy, but I also have a few other splintered off ideas.  I honestly don't think there's any one true parallel for Margulis in Xenogears.  He seems to have a combination of Ramsus' traits as well, just not in his story or character design as much.  After the Ormus reveal in XS3, it's obvious that Stein and Margulis vary greatly on matters of faith.  Stein knows the Ethos is a lie, but Margulis is utterly destroyed when he learns Ormus is just as much of a lie.  It kind of reminded me of Billy's story, except, yanno, Billy didn't run off in his gear and blow himself up when he found out.

Elements Girls => Seraphim Sisters
Probably just Seraphita and Kelvena, because the fuzzy likenesses on their poster are pink and blue, if I remember correctly.

Xernie8D wrote:^ I knew you'd mention Ramsus/Cherenkov, I left him for you to post. =p
And I fully agree, btw.

katimus wrote:Isaac Stein/Bishop Stone => Commander Margulis
Religious nut with purple hair is so easy, but I also have a few other splintered off ideas. I honestly don't think there's any one true parallel for Margulis in Xenogears. He seems to have a combination of Ramsus' traits as well, just not in his story or character design as much. After the Ormus reveal in XS3, it's obvious that Stein and Margulis vary greatly on matters of faith. Stein knows the Ethos is a lie, but Margulis is utterly destroyed when he learns Ormus is just as much of a lie. It kind of reminded me of Billy's story, except, yanno, Billy didn't run off in his gear and blow himself up when he found out.

This is an interesting one. I would never have thought of this one myself. I guess it's because I never thought Bishop Stone has purple hair. Isn't that purple part just his hat? For example, check the images in the spoiler box to see what I mean; 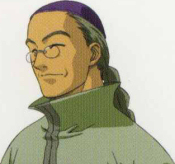 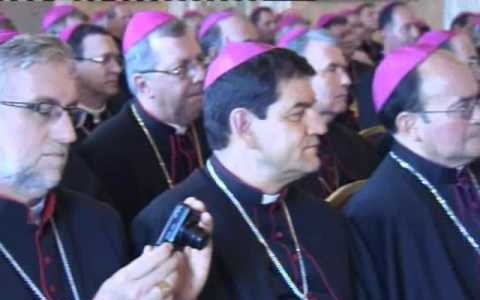 Also, Xenogears seems to imply Bishop Stone abused children, which makes him a villain who deserves no sympathy in my eyes. Margulis on the other hand is someone who I kinda felt sorry for in the end.

But yeah, quite interesting what you pointed out.

PS: Margulis' theme in XSI has a very similar "structure" to Grahf's theme. It starts in a similar way, i.e. it has a similar build-up to the short dramatic part before going into a similar quiet, sinister part. I don't think it's a coincidence, even though I have no idea why Margulis of all people would have a similar theme to Grahf's. Perhaps just by random?
(Or am I the only who thinks their themes sound similar?)

katimus wrote:Elements Girls => Seraphim Sisters
Probably just Seraphita and Kelvena, because the fuzzy likenesses on their poster are pink and blue, if I remember correctly.

I'd like to add that Tolone's (XG) character design looks quite similar to Lapis Roman's (XS). Could be just a coincidence, though.

"There is no growth without birth.  Without a foothold in the past, we cannot walk toward the future.  Get thee gone, darkness!"
salut hurricane

This isn't exactly a character...but Omega Metempsychosis (fused Dmitri in Abel's Ark of XSIII) felt like a big shout out to Deus from Xenogears. Metem is a million times easier than the latter, and it kind of felt like a big apology from Monolith for making a lot of people get their asses handed to them when they fought Deus the first time. I dunno about you, but I got schooled. XD In terms of design, I found there's a lot of similarities based on their head, shoulders, arms and a little bit on the legs (and obviously their two dangling mini-angel pals

), though Metem takes more of Res Novae's form and looks more like a bipedal robot.

Adding a little to the Yuriev --> Miang & Fei a teensy bit.
Yuriev, if I remember right had an irrational fear of U-DO and created the URTVs to eradicate it, so yeah, his motive pretty much stems from a need to blow up God. Being the manipulative jerkface he is, Yuriev does get to transcend time a little, though I don't quite remember him playing EVERYBODY like violins like Miang does, but since he took over Gaignun and the Zohar Project, thus making Omega Res and keeping Abel tight under his hold for a long time, he does get props for that.

Dominia (XG) --> Pellegri (XS)
They're not exactly the same, considering that Pellegri had lingering romantic feelings for Jin and she wasn't necessarily 'saved' by her involvement with Ormus as Dominia was 'saved' after Elru's destruction. But I found the way both characters look up to their commanding officers (Ramsus for Dominia and Margulis for Pellegri) are pretty similar. Both are quite strong women given their position in life, though Dominia is a far more physical fighter than Pellegri seems to be, but both can respectively hold their own in battle. Again, both forms of appreciation don't have to be concluded to outright romantic love, but Pellegri's reverence for the Ormus religion (and in turn Margulis), to the point that she sacrifices her relationship with Jin for it, is kind of similar to Dominia's tension and respect for Ramsus. I'll add to this a little later because my head is running dry, but yeah.