Is anyone else on the replay here? i decided to replay this game once again from the start. and i just like to say that Xenosaga, you're so much fun to play. Episode I had a lot of things i forgot about.

the first thing that comes to mind, Jr's green pants, and long dark night, and gun-ho fast pistol blazing style. truly is the little master. what a skinny tiny little guy. Jin while talking to Shion over skype voice over U.M.N sounded pretty damn hilarious. his photo looked like the episode II Jin but he kind of sounded like a housewife or something. Definitely didn't sound his character but was fun to listen to. I do like Shion's character design here and her vector suit.

then there's the 100 series panty flicks in this game. precious whities everywhere from MOMO's battleground jumps to the bridge on the Durandal. i also noticed something new here. Shelly wears a black panty. in one of the scenes she turned and there they were, black in colour. what a bunch of funny guys XS I developers are. i can't wait to catch more of this later on in the game.

currently heading to the Cathedral ship and a trip to Cherenkov's back story. my guys are weak and i need to level up somewhere for a bit. i'm gonna give a break here for a while.
_________________
Guest

Yeah, I didn't notice all the ridiculous pantsu on my first play though.

I started playing recently because my bf has never played it. It's my first time playing since I finished XS3, and I'm really not used to the proportion of their heads.
kare_reiko

Well, I replayed each part of Saga like 3 times, or more. I'm trying to play whole serie once per year to remind myself why I'm sitting and trying to remake it when it all takes so long XD.
I will play it soon, maybe around vacation. I don't know, I'm in such nightmare moment of my life so I don't know what I will do in next 2 months after I finish University.

I really like to play in ep3, on older emulator version cutscenes on that part were little problematic, on new one it would be better for sure (I skip a lot because I needed cleared save for database and character models)
Well, panty topic was awful in that part, they really did those models wrong, you can even see Shion pants on one of first cutscenes.
_________________
In my long-forgotten, cloistered sleep
Someone kissed me, whispering words of love
Is it just the longing of my heart?
Such a moment of such peace...
Guest

It bothers me that all the female uniforms in Xenosaga are sexed up, whilethe male ones are basically full jumpsuits. Ziggu is the only one who shows a little skin, and that's more because he is mechanical. Why aren't the uniforms in the future more unisex? It doesn't make any practical sense other than I guess people in the future are pervs.
Xernova

^ chaos' XSI outfit isn't exactly very innocent either, it seemed like a very tight fit with such a noticeable bulge. >.>

Funnily enough the bulge disappears in the next 2 games while he develops a very deep voice. Reminds me of a joke I once heard... might be a bit inappropriate, so I probably best skip that joke. xD

Or well, it's not thÃ¡t inappropriate, I'll just put it in a spoiler box;

Spoiler:
A guy with a very-high pitched voice is told by his doctor that his voice can be lower if he has his junk removed. He declines. He later goes swimming in the ocean, when suddenly he yells;

I don't think I need to explain why the above fact about chaos made me think of that joke, do I?

As far as outfits go, XSIII's male swimsuits have one thing which really bothers me; why on earth does every guy have a top piece for his swimsuit? It's like the designers were thinking "We can't design male nipples, we've got to cover them up!!!"

*ahem* Anyway... I haven't been able to replay the Xenosaga games anymore recently. PS2 games look painfully blurry on my HD TV, so I've stopped playing them (my eyes actually teared up last time I tried). I suppose I could play them on an emulator, but that's not exactly ideal either (although my PC should be able to handle it).

Ideally, a Xenosaga HD remake gets made and I can play the games again on my PS3 without any trouble. Sadly, I haven't heard any news about that anymore. Last time I checked, people were posting on Namco's forums in an attempt to convince them to make the HD remake, but I guess I shouldn't expect too much from that anymore, huh? =/
_________________
An angel and a little devil...

I started re-playing the series on and off since my Thanksgiving break. I'm almost done right now (about halfway? through Ep. III).

I was surprised by how much I still enjoyed the games. My tastes have changed so much since I first played the series (it has been about 10 years). I'm way more into western/action games now so I was pretty much expecting to come out of the re-play dislking the series.

I had a friend who is starting to get into video games ask me if she should play the Xenosaga games. I described them to her as less of an overall well-working plot and more of a series of great ideas that don't get tied together all too greatly. I know there was alot of stuff with things getting cut out and in all honestly I don't remember the whole production story all too well but I still feel that with a bit more editing things could get tightened up make the overall story more successful.

about the same time i signed up here, i also signed up at the namco community and put in my wish for HD release. xenosaga deserves it, but it's pretty damn slim i know.
_________________
Guest

I remember thinking XSIII looked sublime on a CRT. Maybe not those exact words, but the sentiment was certainly there. On LCD it's just painful to watch the character models go through their motions. I like wandering around the environments and hearing that chime that sounds when you activate a conversation, though.
oraf

a thing i noticed i hadn't before. During Jr's and Durandal's invasion of the U-TIC battle ship, in one room there was some early designs of T-ELOS. when you click it with Jr, all he says is "says T-ELOS" or something like that. nothing big, just an arm and torso drawings i think. looks like somebody on the U-TIC battleship probably kevin's early work. kinda neat that they had mentioned T-ELOS early on. i missed that completely.
_________________
Xernova

^ I missed that too, but I've read about this before. I still haven't seen it myself and damnit, now I want to know!

*after 15-20 minutes of watching a XSI playthrough of the U-TIC Battleship section*
Found it! <screencaps> 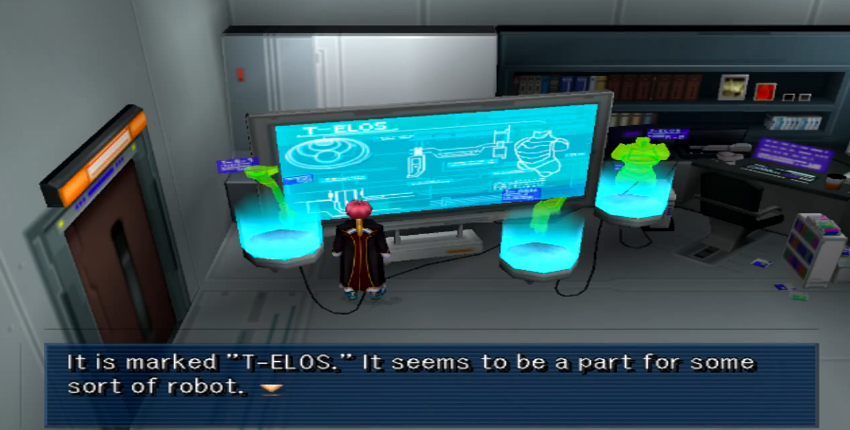 @Xernova wrote:^ I missed that too, but I've read about this before. I still haven't seen it myself and damnit, now I want to know!

*after 15-20 minutes of watching a XSI playthrough of the U-TIC Battleship section*
Found it! <screencaps>

just finished with the slots. like an addict, i was in hitting the casinos for a long time waiting for that jackpot to hit. i went from 80,000 G's worth of coins to 80 G's in less than 3 minutes at level-4 slots pumped to 90 coins each row. damn!

^ Haha, yes, I remember you can win a lot of money with the casino minigame. But 54.131.071? Wow! I won quite a bit with the slot machines myself, but I'm pretty sure it wasn't that much! Hold on, I've still got a very old post of mine backed up in which I mention how much money I was able to get out of the slot machines.

Now where did I store that post again...? Ah, found it!

you are not going to believe this. i went back to the slots and this time i killed it. this one's for all the xeno freaks out there. i went from my 54 mil G's, to now just shy of a 100 mil in G's in one nine reel win. to do this you have to have a little bit of patience and a lot of greed ^_^

i first aimed for the pink bunnies. then went for new reels until super7's appeared. then matched two rows of super 7's at the same time (diagonal &

horizontal). this got me into the nine reel game with an initial payout of 10800 coins (highest payout of coins one can enter the nine reels with i think). the final test of greed is to attempt all nine reels, do or die style. after 20 minutes of failed attempts, i walked away with 5+ mil in coins which translates to about 40+ mil in G's. i believe this is the highest payout you can get in a single shot with the slots.

^ Lol, wow... I think we can safely say this is the best way to get rich in XSI now. xD

I replayed xenosaga 3 about four times (or three ironically),second one I never replayed (level grinding did annoy me so much...)xenosaga one I still didn't replay,but I intend to,however I'm pretty much maxed up because of the level grinding and all extra stuff.
chaos

@Xernova wrote:^ I missed that too, but I've read about this before. I still haven't seen it myself and damnit, now I want to know!

*after 15-20 minutes of watching a XSI playthrough of the U-TIC Battleship section*
Found it!

Love Jr's Episode I coat so much.

Ive played episode I a couple of times, Not sure if I could handle the battle system in Episode II again. Shame as the actual story is great in that game, the ending really got to me.

» Anybody play the facebook game?
» 10 Of The Weirdest Games You Will Ever Play
» Play Three Chess for Three player
» Anyone want to play Draw Something?
» NG-Play
Current date/time is Wed Dec 01, 2021 8:20 am