So, I got a free copy of Fallout 4 when it released (a nice benefit of working under the same umbrella company as Bethesda), and after messing around in the character creator for a bit (and my husband teasing me for always making a customizable protagonist look like Andrew Cherenkov) and after having seen (Fallout 4 Spoiler)

Spoiler:
what happens to the spouse in the first 15 minutes of gameplay

, I decided to leave the male protagonist styled as Cherenkov and fashioned the female protagonist into his wife.  I gave her my headcanon name for Cherenkov's wife, which is Helen (after the awful PTA meeting meme where the shrewish wife is named Helen).

Running around with this set of customizations made the beginning of the game really enjoyable for me, and reminded me that in my heart of hearts, I really do wish there was some kind of splinter universe where Cherenkov's wife actually did (or came to) love him.  Using Fallout 4 as a way to express this little splinter universe is turning out to be really appropriate even though I haven't gone very far.  It's a nice space in which to overthink pleasant thoughts, while still (Fallout 4 Spoiler)

Spoiler:
living out a little bit of tragedy due to the death of a spouse

I love your Fallout Cherenkov homage. <3 (And now I'm imagining his wife throwing the brownies across the room at the PTA meeting because she didn't get her way. CALM DOWN AND DRINK SOME WINE, HELEN.)
_________________

...of course you did. Now I feel silly for not having come to this conclusion sooner. I wonder if Ziggy would be possible.

(Also, curse the lack of character editor codes. How are we supposed to trade faces now?)
dazzlina 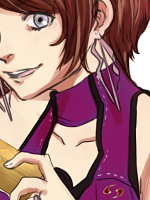 I would love to see pictures of this to be quite honest. It sounds amazing.
katimus_prime

@Yikari - LOL I am the worst. ^^; I'm pretty sure you could get Ziggy fairly easily. There's a default hairstyle that's really close to his.

@dazzlina - Thanks so much for asking! I only have two so far because I haven't played very much (Dragonquest Heroes and Xenoblade X distracting me), but here they are!

"There is no growth without birth.  Without a foothold in the past, we cannot walk toward the future.  Get thee gone, darkness!"
Sponsored content