"There is no growth without birth.  Without a foothold in the past, we cannot walk toward the future.  Get thee gone, darkness!"
kare_reiko

Well, I didn't really liked Reyn but the same I didn't dislike him. He was normal character to play, he had his moments but I had other characters I liked more. And in english translation he hit to Sharla less then In japan one XD
_________________
In my long-forgotten, cloistered sleep
Someone kissed me, whispering words of love
Is it just the longing of my heart?
Such a moment of such peace...
katimus_prime

I think I'm just predisposed to like jovial teddybear bara-types. There's a bunch of slightly awkward pacing issues with the implied romance with Reyn and Sharla, but other than that, I found Reyn to be an enjoyable character story-wise. I'm not so great playing as him, because it's kinda hard to be a tank to rely on DPS and heals from AI in the my-first-solo-mmo setup Xenoblade has going on.
_________________

"There is no growth without birth.  Without a foothold in the past, we cannot walk toward the future.  Get thee gone, darkness!"
salut hurricane

Like you Kat I'm predisposed to liking the literal big goofball bara. And he has it in spaaaaades. I was okay with him, but I think strategically a lot of people tend to do better if they don't directly play the tank. Have to keep the flexible characters in check.

He has some of my favorite end battle lines and conversations. Especially the one involving Reyn, Melia, and Dunban. I always kept him in my party though because he just had a way of lightening up the battle, even if it was going completely south and there was nothing I could do lol. I think some of you already know how I feel about him. But I'm replaying the game and I have a slightly different opinion of him now. I couldn't stand him and found him a lackluster character (more than the others, I mean... it's like the game automatically introduces him as "the bro" and calls it a day about his personal backstory). I don't really understand the massive love he gets from the western fanbase. Because, yeah, he ranks pretty low in japanese polls. Saw this in the artbook actually.

I'm with the japanese gamers, I think... favoring mostly Dunban... and Seven over Melia. The west also seems crazy about Melia... the underdog shy female character. Sometimes, I feel like this is Aerith versus Tifa all over again (especially considering the love triangle with the blond hero... Melia even has a questionable scene with

Spoiler:
comatose Shulk at some point

). I loved them both but Seven is daring awesome while Melia was terribly mishandled (that was disappointing, she could have been much more). Then comes Riki, Shulk, Sharla and Reyn... in that order. This "Reyn time" meme also drives me bonkers (the joke is dead *insert Monty Python parrot scene*). And I don't like his face/design/whatever.

I also rarely play as him, though I always try to include every character in quests and battles for affinity and special interactions, so I do include him at times (especially since I never was able to raise his affinity with either Riki or Melia... and Melia/Reyn intrigues me... mostly because they barely share scenes/dialogues in the main story... and the little interactions I witnessed during quests actually seemed hilarious in a "excuuuuuuse me princess" way, so I want to see the heart to heart scenes now).

But I didn't feel like this about him right away. I think I was okay with him during the time he was Shulk's only companion and when Sharla joined (really liked when they all saved Otharon in the mine). But starting Eryth, it's where I began to dislike him. Because I thought the game only meant for him to be "THE MORON" for the rest of the game and expected me to find it funny and good enough. I didn't get annoyed with Bart's impulsive nature in Xenogears because he had a solid backstory full of drama and character to make up for this. He wasn't just designed to be the "bro" or the moron. I first played with the english cast too... and Reyn's VA makes me think of Wakka's from FF10 (they're not too different actually, minus Wakka being a racist perhaps). In my current "japanese VA" playthrought, I found out that Reyn's english VA contributed a lot in getting me irritated. His japanese voice is better, less obnoxious. And so, I feel less annoyed with him nowadays. And everything wasn't all bad with Reyn... he was protective but not pushy, he sometimes had a good instinct about things/people and he had a few insecurities (making you feel a tiny bit sorry).

Still, despite having my irritation towards the character sort of mellowed with this second (japanese) playthought, he remains one of my least favorite character at the end of the day. With Sharla. That's mainly because they can't top the others for me anyway. I felt annoyed with Reyn. I had issues with Sharla and then... Shulk isn't the most interesting protagonist I've encountered in a jRPG (he was made "likable" to the risk of not being too compelling for some people... I suppose having a custom protag in Xenoblade X is the next step... I actually read somewhere that Xenoblade almost got a custom character instead of Shulk but Takahashi wanted to avoid going down that easy slippery road... I personally think a good character only needs to be relatable, not necessarily likable).

And speaking about the pairing, I (still) think they're better off as friends. The fact that Sharla is engaged and searching for the man she loves for more than half the plot might be part of this (but yes, I get it that if she and Reyn got together, it would probably just happen in a distant future, not during the game... and I get it that Sharla had a few issues with Gadolt... but comparing him to Reyn the minute they met was terrible writing... he gets to be a substitute from the get go and Sharla tries to decide who she prefers while Gadolt

Spoiler:
is robbed from his life/body and then his free will/memories... at some point, I just could guess what the writers/Takahashi had in store for him and I felt sorry for the guy

... and it's not fair either for Reyn to have to "compare" by the way). But... it's just how I get a sibling vibe from them (one example is Sharla's trying to cheer him up when they're alone

Spoiler:
on the fallen arm

). I can't imagine them as lovers.

By the way, talking about Sharla and Gadolt, I got my mind a bit blown lately when someone compared them to Mia and

from the Ace Attorney series (which I'm finishing right now). I never thought about it before but... they're similar, yes. Though I like Mia more than Sharla and I can't help feeling annoyed with

EDIT : Ok, I just read how my post apparently bothered someone and I wanted to say here that... I didn't consider this thread as purely for appreciation. And it seemed I didn't adress well whatever I wanted to say yesterday, so I'm going to be clearer and to the point in this edit : I didn't like Reyn but my recent playthought made me feel better about him. He's still my least favorite of the party because I clearly prefer the other characters (and I have still a few issues with part of his character *lack of backstory for example*)... but I admitted he had positive qualities.
I'm sorry if any of you feel offended because he's your favorite. I didn't mean to bash him. Just to... explain my current feelings about the character.
Monstrocker 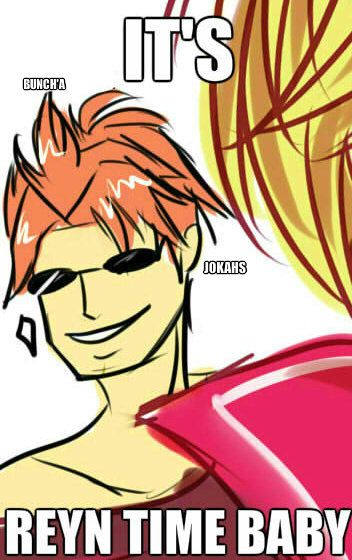 I think my only real issue with Reyn/Sharla/Godot is the timing. If Godot had been much less freshly possibly dead, it wouldn't have been so problematic.

I think there's a lot of love for Reyn in the west because The Big Guy trope is looked on with a lot more of a positive light. I often feel like I'm in the minority as an anime fan and as a JRPG fan because I absolutely adore bigger guys and am more predisposed to like them. Reyn himself is also really positive and jovial, and a lot moreso than Wakka, I feel (I really liked Wakka, too, outside of the initial rash of racism he exhibited), but Wakka was born into a much more doom and gloom situation. The trouble with the Mechon in XB was much less of a Never Do Anything Ever type of threat than Sin was.

"There is no growth without birth.  Without a foothold in the past, we cannot walk toward the future.  Get thee gone, darkness!"
Guest