I figured I'd create this for currently what is our only roleplay thread, so that if anyone else is interested in joining, they don't have to feel awkward about jumping in. Or perhaps they can ask questions.

It's also so that we can perhaps have a little more planning to the thread, as I've noticed events are a little slow-going. So any ideas for where to go next, what to do, or input from newcomers is welcome! 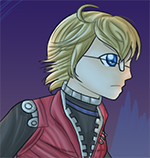 I'll be posting eventually. Sorry I've been so slow, but my brain has been broken this past month due to sickness and other brain butt issues. I've been keeping up with it though, and hopefully I'll be able to get my initial post out there over the next couple days.
Yikari

I seem to have a barrier somewhere between brain and keyboard - for all of the ideas that are swirling about I find myself uncapable of forming a post.

And there are always episodes of aimless curiousity distracting the thought process too. It seems that my mind is more interested in describing the elevator Allen is riding in instead of anything relating to the actual character what they are supposed to be doing in the scene.

@Yikari wrote:I seem to have a barrier somewhere between brain and keyboard - for all of the ideas that are swirling about I find myself uncapable of forming a post.

And there are always episodes of aimless curiousity distracting the thought process too. It seems that my mind is more interested in describing the elevator Allen is riding in instead of anything relating to the actual character what they are supposed to be doing in the scene.

It took me much longer than it should have, but I think I've finally settled on where I will be going with for Allen's first snippet. Barring anything unfortunate, it should be up sometime tomorrow.

Hopefully, it will even fit with the general flow so far (it's gonna be a brief look into what Allen's job is right now, how he is feeling when he leaves it for the day and how he just completely coincidentally happens to be on one of those space stations above this planet).

And it's up. There are probably a bunch of problems with run-on sentences, grammar, punctuation, tautology, improper use of words, etc, etc, but it is about as best as it is ever going to get.

There are some assumptions on my part in there that may or may not fit the ideas you folks have in mind. If something needs to be changed, just let me know.

The general gist of what I tried to convey is that Allen currently happens to be severely sleep-deprived and is thus somewhat loopy(-ier) until he gets some proper rest. I've tried to go with something amusing instead of a full-on gray, mind-numbing routine.

'Softsuit' in this context means a suit not meant to be used for prolonged work in open space (the opposite of which would be 'hardsuit').

Most of other technical details mentioned either come directly from present-day IRL or recognizable sci-fi movie designs and are most likely way too low-tech for Xenosaga. It was a deliberate choice on my part meant to make it easier for anyone to get what I meant without any problems. Could be later fleshed out as one of the consequences of the UMN collapse too.

Side characters introduced so far turned out to be (rather spontaneously) a (probably not completely baseline) human chatterbox Lenny, colorful and upbeat robot Mister Helper and an uncharacteristically untalkative for a realian clerk Clara. I have no idea where I may be going with any of them, they just sort of coalesced into being during the last thirty hours or so.

(The folks with the flamethrower briefly mentioned somewhere appeared after I remembered the movie Fifth Element for some reason. Oh, and that Cowboy Bebop episode.)

When I was considering adding some sort of physical descriptors, it took me awhile to notice that, strictly speaking, when I try to put it to words how I imagined Clara would look like, I kind of consistently end up with T-elos.

While a potentially quite fun opportunity for a plot twist, that is not my call to make, so I just pulled that for now.

On a completely unrelated note, if we are going to do a 'good morning, KOS-MOS' scene with Shion and Allen (and maybe somebody else) present, IMHO, she should totally prank them. 'Nyah' seems like a good topic as any.
Sponsored content