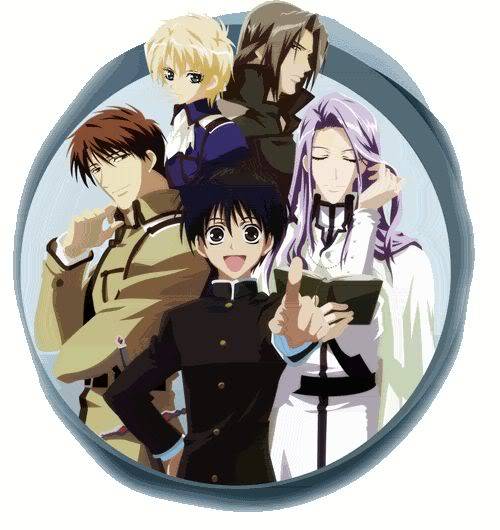 I know what you're thinking.

"This is one of those escapist series. We're supposed to relate to the protagonist. After all, what teenage boy doesn't want to be given a swirly and end up in an alternate dimension surrounded by lustful men?"

Perhaps unsurprisingly, my girlfriend got me into this series. I'm hardly Mr. Straight so the shounen-ai element hardly bugs me. It's also legitimately funny I thought and later on it even became more serious and emotional.

And I guess I should specify I'm talking about the anime. I haven't read the light novels and I've only glanced at the manga. The anime obviously didn't have the best budget but I loved the voice-acting and music.

My favorite characters were Wolfram and Gunter but I loved the whole cast.

That's enough of me.. I just decided to make this thread because I just re-watched Season 1 and 2 and nobody on any other forums I post on knows of the series. I was wondering if anyone here was a fan.?
katimus_prime

Hmm, I've never heard of or seen this one before, but I'll give it a looksee when I get the chance. :>

"There is no growth without birth.  Without a foothold in the past, we cannot walk toward the future.  Get thee gone, darkness!"
Nikkolas

If you like dubs, KKM had a pretty nice one I thought.
https://www.youtube.com/watch?v=r-gIQaFRTTk

Can't find any subs for Episode 1 on YT though...
Guest

So I kind of lost it because I didn't expect to see someone posting about this series here, but I'll restrain myself. It's seriously one of my favorites ever, although I think the anime isn't as strong as the light novels or manga. But, it's definitely enjoyable, I'm just spoiled because the novels are so good...! I'd really recommend giving the manga a shot though, it has more of the original story (like the content that was too adult for the anime, not in a fan service way but rather mature topics, so it really makes the story have more impact). And I think a good amount of it is available in English! Actually, I'm dying just keeping up with the release of the Japanese volumes, and I wish I could import the magazines to keep up with the chapters because I'm so addicted to it, haha.

Really though, I'm just speechless about this series, by which I mean I could write forever about it and never feel like I've said enough, so I'll stop. And my favorite character is just everyone, but maybe Wolfram or Anissina or... No, I give up.
JerriLeah7

I ABSOLUTELY love this anime!!!  The dynamic difference between the different characters and the excellent humor really makes my day.  I want to own it one day.  <3  The plot is very interesting, so I truly wish they would have made it a bit longer, but that's just me.  I found this series to be very addictive--it made me ignore other anime for many weeks.  xD

Wolfram is my favorite character, because his inner feelings and his outer, expressed feelings are quite different and clashing, but at the same time, you can truly tell what he really feels when he says differently.  I like how passionately caring he can be for others while sounding so angry and indifferent while being so.  It's nice to see a fresh character that's quite blatant about his feelings and what he wants and what his goals are.
_________________